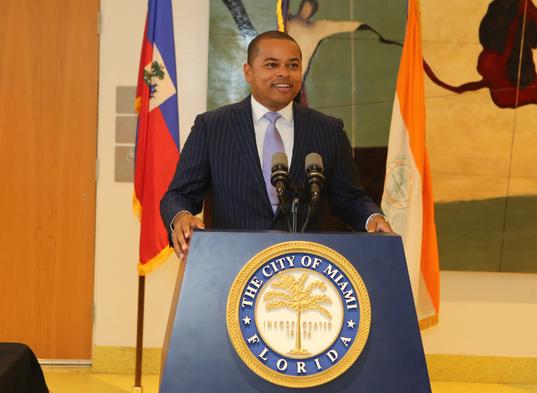 Keon Hardemon was born in Miami to his proud mother, April M. Hardemon.  His family’s first home was in the James E. Scott Public Housing Development in the Liberty City area of Miami-Dade County.  He was raised in the Liberty City community and is the epitome of the idiom that “It takes a village to raise a child”.


Keon’s family stressed to him the importance of education, integrity, and service to the community.  These core values are what helped shape his future.  He is a product of the Miami-Dade County Public Schools System, where he graduated from Charles R. Drew Elementary School, Charles R. Drew Middle School, and Miami Northwestern Senior High School.  At Miami Northwestern, he was a Medical Magnet student where he volunteered his time each week at various community hospitals, including Jackson Memorial Hospital.  However, he was also extremely active in extra-curricula activities.  He was the Freshman Class President, played varsity baseball and football, and was elected by his fellow classmates as “Best All Around” and “Mr. Northwestern”.


After graduating from Miami Northwestern, Keon enrolled at Florida Agricultural and Mechanical University (FAMU).  At FAMU, Keon was extremely active on campus.  He pledged Alpha Phi Alpha Fraternity Incorporated where he was able to mentor dozens of young African-American males.  He served the FAMU student body as a Freshman, Sophomore, Junior, and Senior Senator.  Ultimately, he was chosen as “Senator of the Year” and elected as Senate President of the Student Government Association, where he managed a multi-million dollar budget.  He was also elected as the Chair of Florida Senate Presidents in the Florida Student Association, which is comprised of many public universities throughout the state.  Keon was regularly appointed by his university president to represent student interests on committees that were making pertinent decisions, such as selecting the official banking institution of the university, selecting the athletic director, and improving the relationship between residents of the city and students.  He was awarded the “Chair of the Year Award” for his dedication that he exhibited in assisting in the pursuance of cancer research by the American Cancer Society, and named a “Youth Pillar of the Community” by the Miami-Dade County Black Affairs Advisory Board.  Keon graduated from FAMU with a Bachelors Degree in Business Management and a Masters in Business Administration.


After graduating from FAMU, he returned home to Miami-Dade County and worked for the Fortune 500 firm, Pfizer, Inc. where he educated doctors to assist them in providing pharmacological treatment for various ailments.  While working for Pfizer, he personally organized several community health fairs that were aimed at educating inner-city elderly residents of many different disease states.  One of his health fairs was even commemorated by The Miami Herald newspaper.  He eventually resigned from Pfizer to pursue earning a law degree.


Keon then enrolled in law school at the University of Miami School of Law (UM).  Once again, he became extremely involved with extra-curricula activities.  At the University of Miami, he served as the Symposia Editor for the University of Miami Black Law Review; two-term Parliamentarian for the Student Bar Association; research assistant for a law professor; Fellow for the University of Miami Center for Ethics and Public Service; and Vice-President of the University of Miami Black Law Students Association.  He created and established the Harvard Law, Charles J. Ogletree Jr. Community Forum and Panel Discussion, where he organized a major discussion on whether or not President Barack Obama has an obligation to the Black community.  He taught high school students about Constitutional Law through the nationally recognized Street Law Program; helped provide indigent children with civil representation in court while interning at the Legal Aid Service of Broward County; researched ineffective assistance of counsel cases while interning with a Federal Magistrate in the United States Southern District Court; and assisted in the legal representation of indigent people charged with Federal crimes at the Federal Public Defender’s Office.


At UM, Keon was a Dean’s Honor Scholarship Recipient; Dean’s Public Interest Scholarship Recipient; and regional semi-finalist at the Regional Black Law Students Association Mock Trial Competition.  Most notably, he was recognized for successfully arguing mitigating evidence in a capital case that saved a man from the death penalty.  This was remarkable considering that Florida is the second largest death row state in America.  Despite participating in the aforementioned plethora of activities, Keon was able to graduate from law school a semester earlier than his classmates.  Immediately after graduating, he began studying for the Florida Bar and passed it on his first attempt.  He was officially a barred attorney before his fellow classmates had even graduated from law school.


Keon is a member of the Florida Bar Association, the American Bar Association, Florida Association of Criminal Defense Lawyers, Wilkie D. Ferguson Bar Association, FAMU Alumni Association, and the UM Alumni Association.  He served as an Assistant Public Defender at the Law Offices of the Public Defender, Carlos Martinez where he has represented hundreds of clients.  Initially, he was entrusted with protecting the United States Constitution by representing indigent adults accused of misdemeanor crimes.  He was then promoted to represent children accused of misdemeanor and felony crimes.  In the juvenile court system, he has had a direct impact on the children of Miami-Dade County. Each day Keon assisted in mentoring and rehabilitating the troublesome behavior that many of his clients exhibit.  He recognizes that the criminal justice system sometimes plays a pivotal role in stripping children of their professional aspirations.  Therefore, he fights vigorously to protect them.  Eventually, Keon was promoted to defend adults accused of felony crimes.  Remarkably, Keon won each case he defended while at the Public Defender’s Office in the felony division.


Keon was elected as commissioner in November 2013 with nearly 75% of the overall vote.  As commissioner, he has championed many issues that are dear to his constituents.  He led his commission to enact a Responsible Wage Ordinance, establish an Anti-Poverty Initiative, and prioritized the hiring of low-income communities in major development projects.  Keon granted millions of dollars to residents for housing renovations, provided grants to local businesses to provide them an opportunity to better serve their community and hire more residents to diminish the effects of poverty, and has ensured that the youth in his community have adequate training to become productive citizens.

Today, Keon is the chairman of the Miami City Commission and maintains his own law practice at The Law Offices of Keon Hardemon, P.A.  He values the experience of protecting our Constitutional guarantees and our most cherished right—our right to freedom.